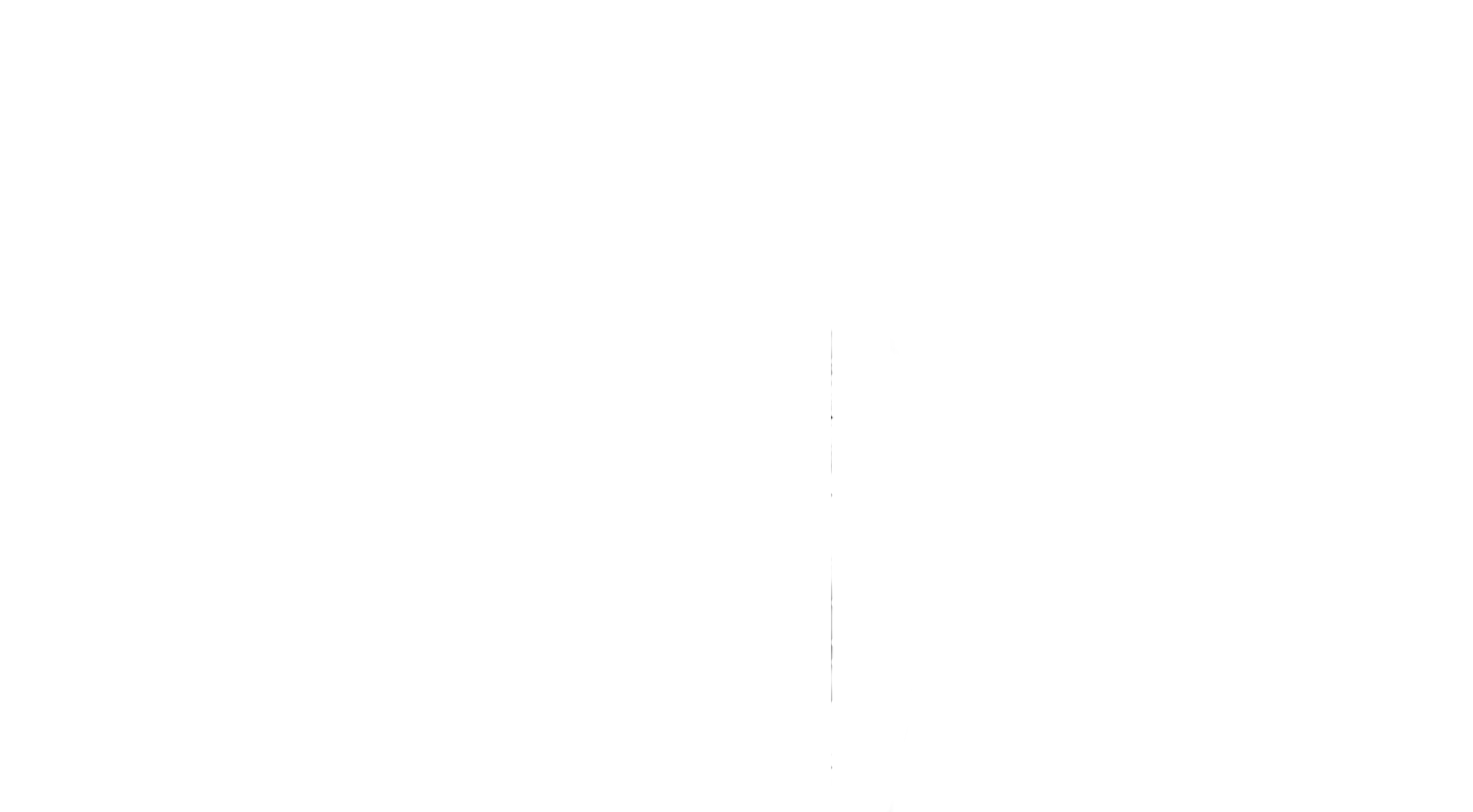 This site is a source of information on Zinc-Nickel (Zn-Ni) coatings as they relate to the aerospace fastener industry.

What are Zinc-Nickel (Zn-Ni) Coatings?

Zinc-Nickel (Zn-Ni) coatings are corrosion resistant finishes that are electroplated onto the surface of parts. They typically contain between 10-15% Nickel, and provide superior protection over zinc plating. Zn-Ni plating is common in the automotive industry, and are often REACH and RoHS complaint if hexavalent chromium is not used as a conversion coating. Zn-Ni plating without conversion or top coatings are dull grey in color.

Zn–Ni coatings often provide corrosion resistance equal to or greater than cadmium coatings and they eliminate the risk of carcinogenic exposure that creates a concern for people working with cadmium hexavalent chromium plated components[10]. 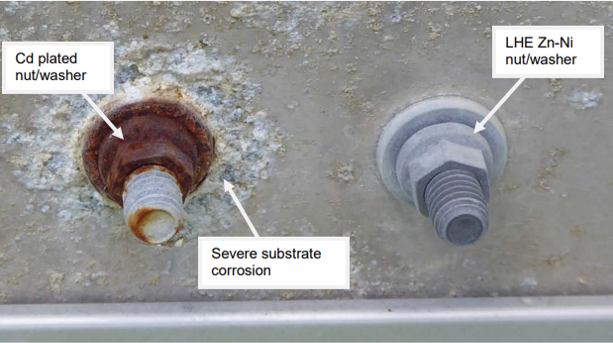 Historically fasteners used in the aerospace industry have been cadmium plated with hexavalent chromium due to its excellent corrosion resistance, low thickness, and freedom from stick-slip. Hexavalent chromium is carcinogenic[8] and is restricted under RoHS and REACH (1000 ppm)[5][6]. Suggested replacements have included trivalent chromium[4]. RoHS and REACH lists cadmium as a restricted substance (100 ppm) and known human carcinogen[5][6]. Unfortunately, cadmium plating is still commonly used in military and aerospace applications, including fasteners[9].

The military and aerospace community has been in search of an alternative to cadmium plating since the 1970s. Due to the industry's need for a stringently tested safe drop-in replacement, progress has been slow. Zinc plating has been considered as an alternative, but its performance characteristics are below cadmium plating.

In 2003, Boeing began work to develop a LHE (Low Hydrogen Embrittlement) Zn-Ni Plating as an environmental alternative to cadmium. The Zn-Ni compositions considered were from 5-15%, and brighteners and other additives were removed to make the plating porous (dull). Boeing reported positive results[2] with plans for future testing. Further testing was conducted reported in 2011 in collaboration with ES3, Boeing, and USAF. The results were highly positive, with some members stating that LHE Zn-Ni is a drop in replacement for cadmium in high strength steel landing gear components[3].

The report concluded that LHE Zn-Ni plating was an upgrade over cadmium hexavalent chromium plated fasteners. It recommended updating NAS (National Aerospace Standards) fastener specifications so that LHE Zn-Ni coated fasteners could be made available to the market[1]. 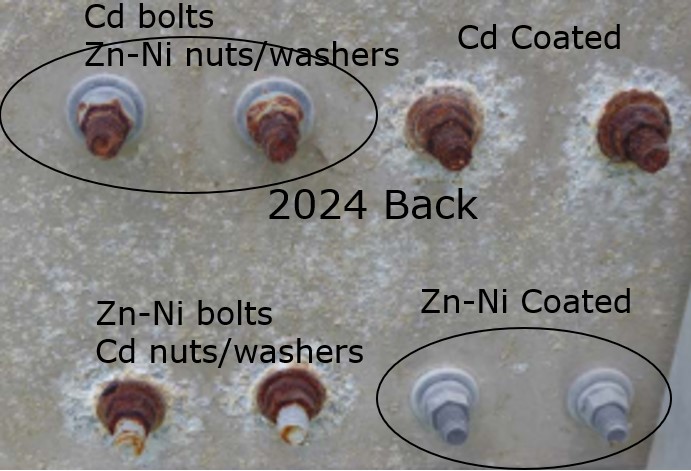 Beach exposure corrosion test results with cadmium and LHE Zn-Ni threaded 4340 160 ksi steel fasteners used to secure a plate of 7075 aluminum on the front to a plate of 2024 aluminum on the back; exposure time is 2.5 years on the beach at North Carolina. The cadmium plated fasteners were processed to AMS-QQ-P-416 Class 2 Type II and the Zinc Nickel plated fasteners were barrel plated with LHE Alkaline Zn-Ni in accordance with AF201427084 Class 2 Type II. [1] 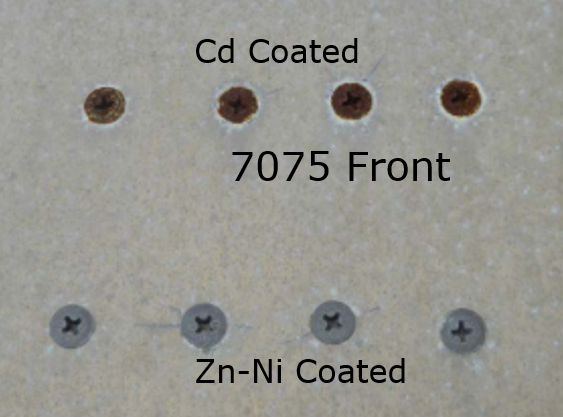 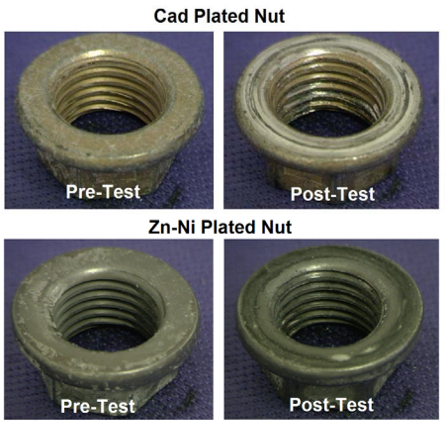 The torque-tension results for both Cd and Zn-Ni plating were fairly similar with the Zn-Ni requiring a slightly less torque (~1%) than the Cd. All five test runs for both the Cd and Zn-Ni plated fastener sets were fairly consistent. The visual inspection of the Zn-Ni plated fasteners after testing showed that the nuts were typically in very good condition as compared to pre-test. Conversely, the Cd plated nuts typically showed signs of coating wear on the threads exposing parent material.[1] 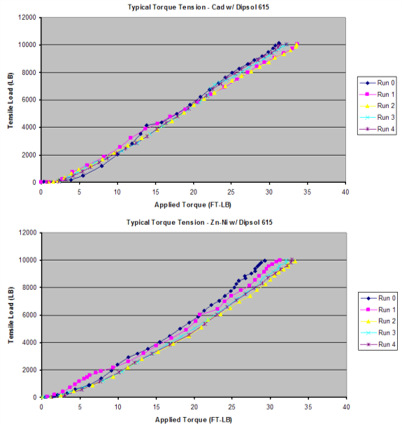 Hydrogen Embrittlement (HE) causes permanent loss of ductility in a metal or alloy over a period of time and can lead to catastrophic failures. Hydrogen Embrittlement requires three conditions to occur: (1) Material Susceptibility (2) Tensile Stress (3) Hydrogen. Three conditions must be met in sufficient amount over a period of time for failure to result. For an introduction on hydrogen embrittlement failures in fasteners, please read below:

Airfasco has begun manufacturing LHE Zn-Ni standard fasteners on the request of Aerospace OEMs. These fasteners are plated per AMS2461 and are REACH/RoHS compliant. Contact Dennis Dent (Dennis@airfasco.com) for AN bolt samples per AMS2461, Type II, Class 2, Grade A with post dip-spin Sealant Cobalt Free Plated.